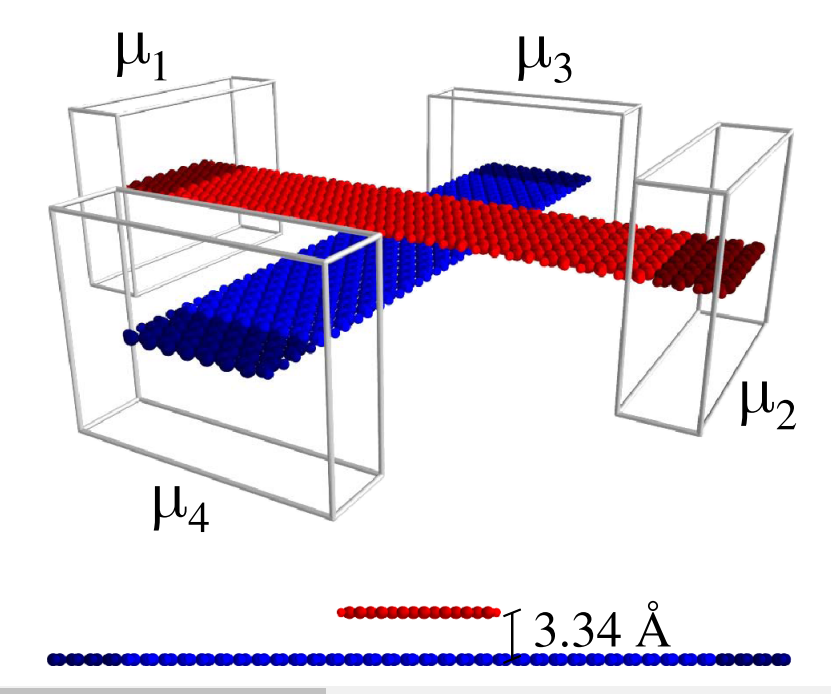 Generic 4-terminal device setup formed by two crossed GNRs. Two 14-AGNRs cross each other in a θ =90 angle. The two planar GNRs are separated by a distance of c = 3.34 Å as shown in the side view. The system is coupled to four semi-infinite electrodes j, each with an independent chemical potential fixed at μj . The boxed regions indicate those atoms which are considered as belonging to each biased electrode in the calculation. Figure is taken from P. Brandimarte et. al J. Chem. Phys. 146, 092318 (2017).

Motivation of the modeling:

The aim of this study is to identify realistic conditions for which an explored prototype semiconducting device can act as a mechanically controllable electronic beam splitter with possible applications in carbon-based quantum electronic circuits and electron optics.

Achievements of the model:

Detailed characterization of the roles of intersection angle, stacking order, inter-GNR separation, GNR width, and finite voltages on the transport characteristics of the device under study.

Device comprised of a 4-terminal junction defined by two infinite H-passivated AGNRs rotated by an angle θ with respect to each other. Electronic and transport properties of the device are studied with the SIESTA/TranSIESTA codes.

The following device properties are characterized:

Daniel Sánchez-Portal, SIMUNE’s collaborator within the RETOS project and member of the core development team of the SIESTA code, is one of the authors of this work.